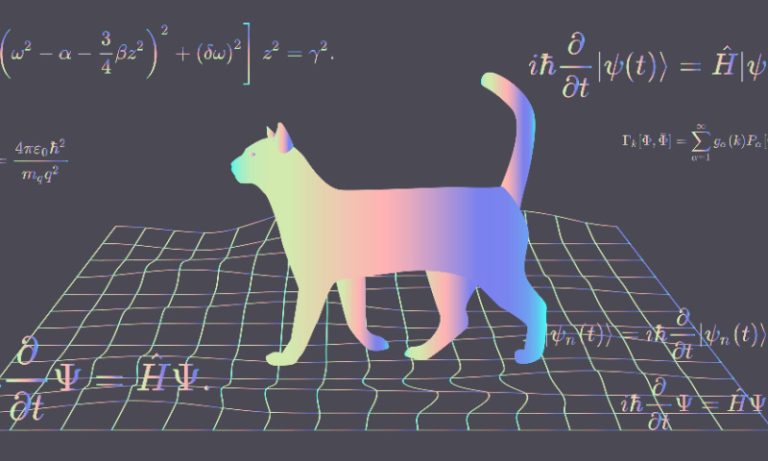 Even though art and science have been treated like two different disciplines, the connection between them is nothing new. They have been mutually inspiring each other from the beginning. If, let’s say, making tools was the cavemen’s science, the cavemen’s art depicted the usage of those tools. Cave paintings feature the tools during the most important and ritualic action: hunting. The invention of storage in pots and dishes led to intricate decorations and objects with ritualic purposes. Great scientific discoveries are often the result of some crazy creative idea no one thought of. Art pulls inspiration from and builds upon the beautiful, abstract ideas of science, even unconsciously. It’s a two-way thing inspiring growth; the crazier the idea, the better.

And we don’t have to dig deep for crazy ideas because, since the 1900s, we have lived in a world fundamentally shaken by the scientific findings in quantum physics. Discovering that on the quantum level, nothing has anything to do with the laws of conventional physics that has changed the world.

The craziness of things in that realm is indescribable by dry words. It is so far from conventional physics that we don’t have words or descriptions for the phenomena. Those hardly have any explanation comprehensible to our minds. Take the two basic examples everyone has heard of, at least by the name:

Limited only to the essentials, here’s a short explanation:

In quantum mechanics, every particle or quantum entity can exhibit wave and particle behaviors interchangeably. As an example, an electron can form part of an electric current in a circuit, and behave like a particle, moving together with other electrons in the conductor. That same electron can behave as a wave when passing through a solid crystalline structure. This is a fundamental property of matter, described by Albert Einstein in the following lines:

“It seems as though we must sometimes use the one theory and sometimes the other, while at times we may use either. We are faced with a new kind of difficulty. We have two contradictory pictures of reality; separately, neither of them fully explains the phenomena of light, but together they do.”

The uncertainty principle was formulated by Werner Heisenberg, the famous German physicist and Nobel laureate, in 1927. The principle proclaims that we cannot predict a particle’s position and speed with certainty from initial conditions. The more we know about the particle’s position, the less we can tell about its velocity and the other way around.

But the uncertainty principle is an inherent property of all wave-like systems. And that is due to the particle-wave nature of all quantum objects.

The problem with language

Given the paradoxical nature of those described above, the problem of formulating them in a way that doesn’t sound like pure nonsense is almost impossible. Illustrations and parabolas can help understand abstract concepts, opening space for artists.

Niels Bohr addressed the problem in his famous quote:

“Quantum provides us with a striking illustration of the fact that though we can fully understand a connection … we can only speak of it in images and parables. We must be clear that when it comes to atoms, language can be used only as in poetry. The poet, too, is not nearly so concerned with describing facts as with creating images and establishing mental connections.”

“The atoms or elementary particles themselves are not real; they form a world of potentialities or possibilities rather than one of things or facts.”

Those findings are mind-blowing even in the present. Imagine how alien and incredible they were back then. Nothing of the properties of the world as we know it is the same at the quantum level. This paradox we’re unable to understand is the brain food for artists. Art has always been trying to express a vague feeling, that there’s something more to the world than mere rigid matter.

Surrealists are known for their mind-bending endeavors of showing reality in a distorted way. They are shaking us out of our comfort zones and creating new connections and contexts. They wanted to show a mundane object as you have never seen it before. They stated that much of our experiences are constructs of our minds. Surrealists like Man Ray or Salvador Dali knew about the discoveries of quantum physics. They found it fascinating and inspiring. Their work, like many other artist’s, revolved around the assumption that reality is not real. They have spent their lives dismantling conventional reality. And then showing its pieces in new configurations.

Quantum physics inspired art in another way too. Dealing with things that are very hard to define, it has inspired many artists who felt the same about themselves. Personalities impossible to grab with simple terms and unable to fit into existing standards have found freedom in it.

The artists of the 20th century focused more on the postmodern idea of the disintegration of reality. The contemporary approaches concentrate more on the infinity of possibilities existent at one moment. And all the things emerging from the quantum space of probabilities.

Expanding horizons and using the imagination to experiment with the boundaries of the knowable is, in essence, the artist’s job. But creating any tangible idea about quantum physics through visuals is a challenge.

Most of the artworks dealing with the subject use merged mediums and require a lot of experimentation with materials. Contemporary Artist Ellen Sandor combines photography, holography, sculpture, and computer graphics in 3D images to create “immersive” experiences in her words. Sandor is known as a pioneer in photography for inventing those techniques called PHSColograms. Ellen Sandor’s work was about visualizing the invisible at the Department of Energy’s Fermilab, America’s particle physics and accelerators laboratory. Sam Zeller, a neutrino physicist, said about her work: “Because she strives for scientific accuracy, we can use Sandor’s art to help us explain how our detector works and demonstrate it to the public.”

The work of many contemporary artists serves science by creating a means to make very complex concepts understandable to everyone through intuitive visualization.

Over the course of the past 100 years, the scientific findings of quantum physics have inspired artists in many ways. And they continue to do so today. There has never been such a need for well-formulated visuals to explain scientific ideas. And at the same time, there has never been a greater challenge for artists to grasp concepts of such uncertainty and potentiality. The changing visual aesthetics and new tools pose another challenge and simultaneously expand the possibilities of what can be done. One of the most important outcomes is a thriving interdisciplinarity, serving a very important mission: getting the knowledge to everyone.

Shade curtain is one of the popular and practical curtain models